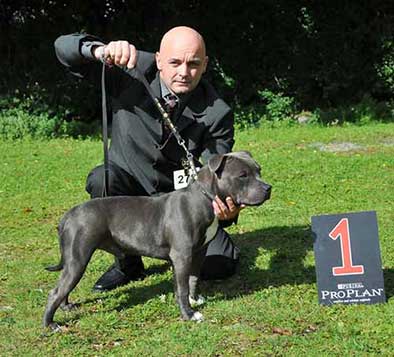 I’ve got my first staffy whilst doing voluntary work for the canine defence league, a lovely 4 year old bitch called Roxy who needed a new home after being rescued by the UK Staffordshire Bullterrier Rescue. Shortly after came my second female who named Jovi, (yes after Jon Bon Jovi!)! Well that was all a long time ago, in my now distant youth. Several years ago now and always keen to help rescue animals I adopted “Yuppie” a Staff Mix. On to more recent times, I was travelling back to the UK via the channel tunnel. Whilst waiting for my train at Calais I met an English guy with a blue Staff. I decided that for my next dog I would get a pedigree dog from a breeder and it would be blue.
Some months later and the little Lightning McQueen Great ‘n Glory was checking out his new home with our family. Lightning soon settled in, getting up to the usual puppy mischief, and keeping the, now eight year old Yuppie busy with his never ending attempts to play….ha-ha poor old boy! Lightning is now 9 months old, the two dogs have bonded together really well and are now great friends as have all the family including the two children (eight and ten). Lightning has developed into a great example of our beloved breed; he is of perfect size and weight for his age friendly and always looking for his next little puppy adventure in life.
It really does show that Lightings breeding was perfectly handled. All of my family would like to thank Katie and Dennis for all the time, effort and endless support that they have given us right from our first phone call through to the present day. Their endless commitment to the breed, charity fundraising events and their customers who they see more as “friends than customers” is to be highly commended I would not hesitate to recommend Great ‘n Glory to anybody who is looking for a four legged family member.
Many many thanks to the both of you!